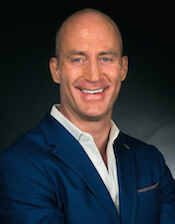 Robert Hotchkin ministers with Patricia King and XP Ministries. He is a passionate lover of Jesus Christ and that passion is truly contagious! He ministers with strong faith, releasing revelation, prophetic decrees, healings, miracles, and the love of God. This month Robert shares how the Lord is about to raise up another generation of mature sons who are willing to allow Him to “raise the bar” in their lives.

Get ready to see a move of God among men in the Body of Christ. It will be marked by significant personal encounters with Holy Spirit that stir men to arise as mature sons who move beyond being mere believers to become true disciples. The God of Abraham, Isaac, and Jacob will reach out to men of every generation and invite them to walk with Him and be mentored deep unto deep in the ways of the Kingdom as He launches them into greater authority, greater reach, and greater impact in every sphere of influence. More than releasing men into what we traditionally think of as ministry, this move will be about releasing the revelation that as followers of Christ men are in ministry right where they are in their workplaces, communities, families, marriages, friendships, and relationships, and because of whom they walk with, they are plugged into the most brilliant mind, creative power, influential force, and abundant source in the entire universe. These sons will know their Father, and in knowing Him they will have a grace and passion to make His character, nature, will and ways known in all they do. They will be about their Father’s business in every area of society, because they have allowed Him to do a deep work in their hearts and minds.

The Church Started with a “Men’s Movement”

In Matthew 4:18-22 we see Jesus begin His ministry in the earth by approaching men and personally inviting them to come and follow Him. Those who said yes walked closely with the Lord each and every day. He taught, mentored, and poured into them. He gave them a new way to look at things, a new way to do things, and a new way to approach the world and the people in it. On a daily basis, Jesus encouraged them, empowered them, and provided for them, all while helping them get past any mindsets or behavior patterns that had trapped or limited them. It didn’t matter if they had been successful or had been struggling. It didn’t matter if they were well educated, or had no formal education whatsoever. Their pasts and histories didn’t qualify or disqualify them. It wasn’t about their personality types. All that mattered was that they were willing to respond to His invitation when He reached out to them. These men became His closest friends and associates, and grew into what became the First Century church – a group of Kingdom-minded, miracle-working believers who went throughout the earth bearing witness of His presence, power and personality. Jesus met these men where they had been and turned them into agents of impact for the world and days in which they lived.

Raising Up Those Who Will Raise the Bar

He is the same yesterday, today and forever (Hebrews 13:8), and He is about to do a similar thing among men in the Body in this hour. Another movement among men is coming where the Lord will once again sweep through the land, inviting men to come and follow Him. Those who respond will encounter His presence, experience His character and nature, and in that will awaken, arise and be released into who they are and what they carry as sons of God.

The Lord is about to raise up another generation of mature sons who are willing to allow Him to “raise the bar” in their lives. These men will respond to His invitation to “come up here” (Revelation 4:1), encountering Him more deeply, coming to know Him more fully, and cooperating with His transforming glory and grace more completely. These men will become agents of impact for the Kingdom in every sphere of society and realm of influence. At XP Ministries we see this and are committed to serving it. That is why we are launching “Men on the Frontlines” – a series of live online and on-site events focused on mentoring Kingdom men on how to live in the fullness of victory and influence they were created for. Men on the Frontlines is dedicated to supporting and blessing men as they are affirmed in their divine gifts, earthly callings, and godly character. And just like with His original disciples, the “men on the frontlines” that the Lord will raise up in this hour are going to have a tremendous impact on the people and world around them!

Let’s pray and declare that: Revived, Refreshed + Re-Ignited! – A CD teaching from Robert Hotchkin
If you are weary, discouraged or disappointed, you need to hear this message from Robert Hotchkin that will fill you with a new level of zeal and expectancy fueled by a remarkable revelation of the goodness of God and the revival power of Jesus Christ. Revival is coming – to you, and then through you into the earth! More! – A CD teaching from Robert Hotchkin
Have you been crying out for more of God? More of His presence? More revelation? More of His power? More of His Kingdom coming? More love? More miracles? More signs and wonders? In this message, Robert Hotchkin reveals how to go deeper, allowing the Lord to remove things from your life that have hindered you so that you can become the full expression of God you were created to be. Personal Revival – A 2-CD teaching set from Robert Hotchkin
Have you ever wondered what God is doing, why He’s doing it, or what it’s all unto? It may not always feel like it, but God really is up to something in your life – something big! What you’ve been through, even what you’re going through right now, is all part of it. You haven’t missed the boat. You aren’t going to be left out. As a matter of fact, God is getting ready to meet the cry of your heart in ways you couldn’t even imagine. As you listen to these messages, discouragement will melt away; faith will be stirred; and weariness will disappear. You’re about to experience a personal revival that will rocket you beyond your circumstances and launch you into the very midst of what God is doing!