An Echo of Blessing is Being Released- by Francisco Arboleda 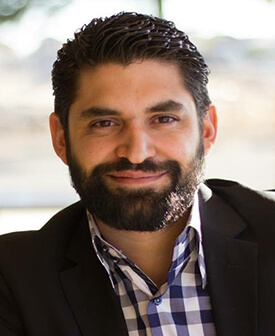 Francisco Arboleda is a key member of the Patricia King Ministries family.  He was hand-picked by Patricia to serve as the Pastor of Shiloh Fellowship – a church with both a global and local outreach. He has the heart of a true shepherd, caring for and covering every member of the congregation.  He is walking in his calling, and living his dream. His passion is to help others do the same. This month, Francisco shares how to hear God’s voice with greater amplification and greater clarity than ever before.
There are moments when you are seemingly going about your life and all of a sudden Holy Spirit speaks up.

Recently, I was calling out to a friend at work and in trying to get his attention I playfully said his name with an echo, as if we were out in the wilderness. In that moment, I heard the Holy Spirit say to me that who we are and what we do is the result of an echo from heaven and there is an echo of blessing being released over us.

Captured by this thought I asked the Holy Spirit, “An echo?” Yes, He said, an echo.   We are in a season of blessing and you will hear the Lord with a resounding echo and your life will be one that displays the Father’s goodness from heaven over the earth.

As an echo travels through the air, it creates sound waves that amplify the voice of the one who spoke it, just as God’s voice is being amplified in our lives. As I kept repeating my friend’s name over and over in my impersonation of an echo, he couldn’t ignore me if he wanted to. My voice got his attention and he knew what I was saying. The first part of receiving this “echo blessing” from heaven is knowing that you do hear God’s voice. A verse that has blessed me personally so much is John 10:27, “My sheep hear My voice, I know them, and they follow Me.”

The first time I heard this verse in relation to hearing the voice of God was years ago during The Prophetic Boot Camp taught by Patricia King and Robert Hotchkin. It speaks so much truth.  The reason the sheep follow the voice of the Shepherd is because His voice leads them to life. That’s right, the voice of God speaks life but also leads you to life. A good picture of our Shepherd’s leading is lovingly interpreted by David in the 23rd Psalm.

The next part of the “echo blessing” is hearing with clarity. When we can hear with clarity we don’t second guess what was said. The echo doesn’t change its message halfway through it being spoken and God isn’t reversing His promises over your life. In fact, just like an echo, His promises are being constantly repeated over your life and even through His word. When God gave Joshua charge over Israel to lead after the passing of Moses, three times the Lord tells him to be strong and courageous. And just like He spoke to Joshua in that day, God is speaking over you now.

Get ready because you are going to hear God’s voice with greater amplification and greater clarity than ever before. You are God’s echo of goodness on the earth.

Pray the following decree over your life:

I hear the Lord’s voice. I know him and He knows me. For I know that the Lord has plans to prosper me and bless me. Not to harm me but rather to give me hope and a future. Because the Lord is my Shepherd and my Best Friend, I will not lack or have need of anything. He offers a resting place for me. His tracks take me to an oasis of peace, the quiet brook of bliss. That’s where He restores and revives my life. He opens before me pathways to His pleasure and leads me along in His footsteps of righteousness so that I can bring honor to His name.  I remain confident in this, that I will see the goodness of the Lord in the land of the living. Amen! Do you desire to hear what God is saying in this hour? Are you crying out for the Lord to speak to you about the deep mysteries of His Kingdom? Do you wonder what His plans are for your life? Then you need ears that hear! In this powerful book, Patricia King shares with you what she has learned about hearing God’s voice during her more than 30 years of being a Christian. As you read, you will learn simple and practical ways to step into the prophetic and begin listening to what the Lord is saying. Jesus has given you EARS THAT HEAR, and He has so much He wants to tell you! LEARN TO HEAR GOD’S VOICE – CD/MP3 from Patricia King
The voice of God is powerful, and yet He speaks so often through a still small voice. In these whispers He can reveal His plans for you, lead you into the miraculous, and share with you the depths of His love. No wonder the enemy, from the very beginning, has tried to cast doubt upon our ability to hear God’s voice. In this teaching, Patricia King gives practical insight on discerning God’s voice so that you can grow even closer in your walk with Him. PROPHETIC BOOT CAMP! – CD/MP3 from Robert Hotchkin and Patricia King
This is the prophetic made simple. In these lessons, Patricia King and Robert Hotchkin dig into scripture and pull from years of experience, to help you grow in your ability to hear the Lord’s voice and connect with His prophetic flow. You’ll discover the different ways the Lord speaks and the main ways you tend to receive from Him. You’ll learn to recognize His voice and receive words of knowledge, encouragement and destiny for yourself and others. All while growing in intimacy with the Lord, and awareness of the Holy Spirit. The study manual (not included with the CD series) contains all the scriptural references for the school plus pages and pages of activations so that you can put into practice all that you learn!
We at Patricia King Ministries thank you for your prayers, partnership, and financial support. May you be richly and abundantly blessed. And remember, God loves you with an everlasting love!